Palaeontologists in Brazil have studied the head of a pterosaur named Tupandactylus imperator, andclaim to have found “simple and branched feathers” on the back of its crest.  They examined these with an electron microscope and found they contained various shaped melanosomes – tiny vesicles containing the pigment melanin.  Variation in the shape of melanosomes is known to be associated with different colours in bird feathers so what about this fossil?  |

The pterosaur skull was found in Brazil and is dated at 113 million years old, which has led to speculation about the origin of feathers.  Since pterosaurs are not dinosaurs, Maria McNamara of University College Cork, who led the study, suggested feathers must have been present in the common ancestor of dinosaurs and pterosaurs in the Triassic period 250 million years ago.

However, not all scientists are impressed.  The branched structures are very small – between 2 and 5mm long (max 1/5inch) , with a central shaft approximately 6µm across.  According to Science (AAAS) News: David Martill from the University of Portsmouth says these small branched structures “look nothing like feathers.”  He does agree they were coloured.

Editorial Comment: David Martill is right – these tiny millimetre sized filaments look nothing like bird feathers.  They are simply fibres associated with the outer surface of the crest on the pterosaur’s head.  (See illustration below) The presence of melanosomes may indicate they were coloured but that is not evidence the filaments were feathers.  Melanosomes are found in any coloured skin surface or surface structure, such as scales and crests.

The only reason for calling filaments feathers is the current obsession with finding “feathered dinosaurs” to prop up the theory that dinosaurs evolved into birds.  Putting the origin of feathers into some unknown common ancestor of pterosaurs and dinosaurs is total blind faith. 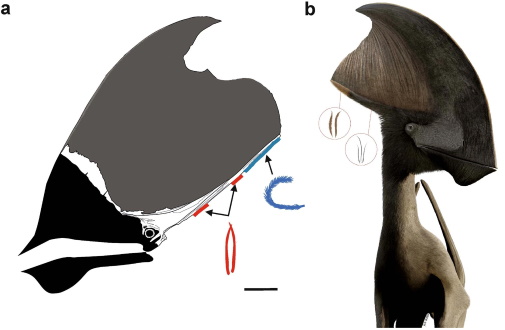 Were you helped by this item? If so, consider making a donation so we can keep sending out our newsletters and add more items to this archive.  Donate here.