An international team of palaeontologists from Peru, France, Italy, the Netherlands, and Belgium who were exploring in Peru have found a jaw bone, forelimb and hind limb bones, the pelvis and some vertebrae of a fossil they claim is a “quadrupedal whale skeleton”. The animal has similar body and limb proportions to fossils found in Pakistan and India that are also claimed to be four legged whales. Olivier Lambert of Royal Belgian Institute of Natural Sciences, one of the research team commented: “This is the most complete specimen ever found for a four-legged whale outside of India and Pakistan.”

The animal would have been capable of walking on land as its sacrum was attached to its pelvis, and its toes had small hoofs. The tail bones had similar features to those seen in otters and beavers, so the scientists suggest it was also a strong swimmer.

The new fossil has been named Peregocetus pacificus and has been dated as 42.6 million years old.  Travis Park, an expert in whales at the Natural History Museum, London commented: “Whales are this iconic example of evolution.  They went from small hoofed mammals to the blue whale we have today. It’s so interesting to see how they conquered the oceans.”

Editorial Comment:  This fossil creature had four legs, so it could walk on land, but it is not a whale.  It may have been a semi-aquatic creature like an otter or a beaver, but no-one pretends otters and beavers are whales, so there is no excuse for scientists or media to pretend these new fossils are whales or even whale ancestors. 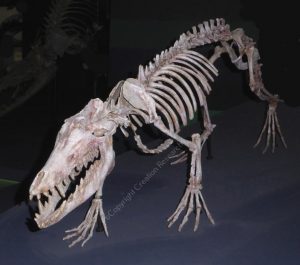 The creature may be similar to fossil creatures found in India and Pakistan, known as Pakicetus and Indohyus but they are have been exposed as non-whales also. Pakicetus (photo on left) was originally named after an isolated skull found in Pakistan with its whale claim based on its middle ear structure being similar to that found in whales, but it was other otherwise like the skull of a land-dwelling animal.  Years later the body and limb bones were found of the same creature – it had four legs, and was clearly a land-dwelling animal, more like a fox or dog.  Pakicetus featured on the cover of Nature with the headline “When whales walked the earth”.  (Nature, 20 September 2001)

The only reason for calling Pakicetus a whale is the blind faith belief that whales are descended from land-dwelling animals, expressed by Travis Park above. This new fossil of an extinct land walking creature does not show how small hoofed mammals conquered the oceans any more than Pakicetus did.

The fact that these creatures no longer exist is no evidence they evolved into whales. But it is evidence there were once more kinds of semi-aquatic creatures than there are now, which fits Genesis, not evolution.  Genesis tells us God created various mammals as complete fully functioning animals, according to their kinds.  Since then they have reproduced after their kinds, and some have died out as the world degenerated.